I’m not sure if you remember me, but we met the other day at the hotel.

Well, I guess we didn’t exactly meet. I don’t know your name. We didn’t even speak. In fact, you were barely wearing any clothes, which would have been incredibly weird if you weren’t swimming in a pool at the time.

My son Jack was in the pool with you. You know, the tall boy with the short brown hair and the orange and blue bathing suit?

Anyway, you were swimming laps. Or maybe I should say you were trying to swim laps, because every time you started at one end of the pool, Jack swam right alongside you, kicking and splashing like some out-of-control dolphin.

He isn’t the best swimmer, but he does love the water.

Well, that’s not exactly true. He doesn’t always love the water. In fact, now that I’m thinking about it, he didn’t swim all summer because he was afraid the water in the pool and the lake was too dirty. He just hopped around and watched all the other kids play. This annoyed me and made me sad at the exact same time, because it seemed a little OCD—Obsessive Compulsive Disorder.

Obsessive Compulsive Disorder is a symptom that often accompanies autism.

He may or may not have Obsessive Compulsive Disorder, because like the good mother I am, I have been looking the other way when he insists on washing his hands a bunch of times a day.

I know you saw a boy who was being kind of rude and invading your personal space and splashing around in a small hotel pool, but there was a lot you didn’t see.

You didn’t see the three hours he sat in the car because what was supposed to be a 2-hour ride became a 3-hour ride with all of the snow and the holiday traffic.

You didn’t see how he didn’t get his lunch at McDonald’s like we’d promised him because we were trying to beat the weather.

You didn’t see him try to staunch the tide of anxiety and rigidity and self-stimulation that overwhelms him every minute of every day, or how much he’d been flexing and bending and compromising—very hard skills for a boy on the spectrum.

I know he was being annoying. Usually I get right up and intervene when something like this happens, because no one deserves to be bothered by someone else’s kid. This time, though, I didn’t.

Usually, we tell him every social story imaginable. We use pictures and short phrases to explain social situations to him ahead of time. We’ve explained how to use a public restroom, and when to raise your hand in school, and the way you have to whisper in the library.

I did not explain what he should do if he’s swimming in a pool and a grown-up is trying to do laps and how he should not splash around or get in the way because it isn’t polite and it’s important to be respectful. That’s the thing about social stories. You never know when you’re going to need one.

Usually, we explain our son to every person we encounter—the teller in the bank and referee at his brother’s basketball game and the optometrist who does his eye exams.

We light our house up blue every April.

We try to raise awareness.

What you can’t understand is how, last week, my husband and I watched old videos from when Jack was a year old. We watched him stare blankly at a bowl of Cheerios, and look just past our shoulders on the swing at the park, and the way he wouldn’t follow our gaze when we pointed to a duck, or a dog, or a plane in the sky. It made us so sad, we could hardly look at each other.

What you couldn’t know is how, when he was four years old, he ran across the street without me. He stood there, stranded as if on an island, and I shouted at him to stay, stay where he was, Mommy was coming, I would get him.

He darted across the pavement to me just as an oil truck rounded the corner and rumbled down the road. He darted and he was wearing little blue sandals and he darted and I was really truly honestly sure the truck would hit him.

You can’t possibly know that weeks later, I told the oil-truck-darting-blue-sandals story to a neighbor of mine, and my voice broke while I spoke. And this neighbor of mine, he folded my hands within his, and he reminded me Jack was safe, the truck was further down the road than I thought, nothing bad was going to happen. He told me I needed to change the story in my mind.

The story that autism is awful and scary and the people who have it will never fit into society.

Or the story about vaccines, and medication, how every person who has autism can count cards in Vegas like Rainman.

Basically, I could take the old black and white narrative, and add color and flair to the pictures. I could alter the timeworn narrative and replace it with a different version; one that includes the heartbreak and the frustration and all of that, but also captures the nuances of hope, and joy, acceptance and kindness.

Anyway, I can’t tell you exactly why, but sitting on a metal chair in the humid pool air, I just wanted to watch. I wanted to see if the work and the stories and the awareness we’ve told and done for the past thirteen years have made any difference.

Then Jack stood at the edge and did a giant cannonball into the water, basically on top of your head. I stood up from the chair where I was sitting and I started toward the edge of the pool. I was going to call him out of the water and tell him he needed to give you some space, and if he couldn’t do that, then he would have to dry off and head back to the room.

You saw me get up, and you looked at him, and maybe you connected the dots.

Maybe you saw a mother’s sweat and tears, or my defeat, and my pride, and my everlasting hope. Maybe you even saw a big silver oil truck on a smooth summer afternoon.

The truth is, I don’t know what you noticed or realized. I’ll never know, and really, it doesn’t matter. It only mattered what you did.

Then he stared at you and you looked at him, and you asked him a question.

“Would you like to race me to the end of the pool?”

“Yes. But they don’t have a good fire code in this hotel.”

Boy meets the world, and the world is good.

Thank you for being a part of our story. 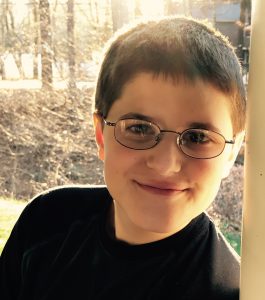 Holiday Gift Guide for Someone With Autism Where are we going?

Hi, my name is Carrie.  I have five kids and my second son, Jack, has autism. Time is a curious thing. It compresses, and expands. And when it comes to keeping a teenage boy with autism busy at the end of June, it stands still altogether.  I wake up every morning mapping out possibilities. A […]

There are all kinds of fathers. Strict, playful, reserved, affectionate.  Some change diapers and nuzzle newborns, others prefer toddlers, or even teenagers.  But you are a special-needs father. You are in a league all your own. I remember the way you gazed upon this baby with a mix of bewilderment, and awe.  I watched you […]

A Pocketful of Pennies

I have said it before, and I will say it again. I cannot teach my son to whisper. Hi.  My name is Carrie. I am married to a man named Joe and we have five kids and they are big and loud and sweet and funny. I have been cooking for seven people during the […]