I never wanted to be The Person.

You know, The Person—the one in a marriage who handles all the kid stuff, like changing the diapers and checking the homework folder and buying shoes.

(The Person is also known as the Default Parent, The Micromanager, or the Helicopter Mom.)

I did pretty well for the first year I was a mother. Our oldest son Joey was born and, for the most part, my husband Joe and I handled the responsibility of taking care of a new baby fairly equally.

I didn’t care how he swaddled him, or what he which outfit he chose, or whether he used the blue pacifier with the duck on it or the green one with the frog when he fussed.

Then my second son Jack was born. He was a little, uh, unusual right from the beginning. He never looked at us, he never slept, and he cried all the time. Both Joe and I saw it. We were both worried.

We exchanged uneasy glances on the couch late at night while we took turns rocking and soothing and walking our angry, mysterious baby.

Then he was diagnosed with autism. And things changed.

We didn’t sit together on the couch as much. We didn’t exchange the glances, and we didn’t take turns soothing. I think this was because, overnight, I became The Person.

After the diagnosis, I was the only person who could feed Jack his mashed bananas that he spit right back out or could rock him to sleep so he would wake up twenty minutes later screaming or could get him to look at me if he wanted juice.

I threw myself headfirst into specialists. I read articles. I researched therapy. I was frantic, and yet I thought I was the only one who understood him.

There I sat, on my island of invented expertise, like a carping queen in her ivory castle.

And of course, I took Jack right along with me. We looked around, and we looked at each other. We looked across wide, deep spectrum moat that separated us and we saw all the other people out there, having fun and laughing and sitting in the sun.

This was not good; for me, for Jack, or for my marriage.

See, when you are the only one who can do everything and you do it perfectly and you sneer and roll your eyes when someone else tries to step in and help, then you will wind up doing every single thing yourself. And this will make you mad. A little sad too, but mostly mad.

Because, if you are anything like me, you will blame your husband since clearly, he is very lazy. He is maybe even a little bit stupid because he doesn’t understand that the special diaper cream must go on every time this little hiney gets changed and if the bananas have any lumps then it won’t work. And the green bowl is really best because the bottom is flatter.

So you blame and blame and maybe you feel resentful. Resent is like a tiny seed that plants itself in your heart and your mind. Except instead of blossoming into a beautiful, silky flower, it grows into an ugly weed when all you really need is colorful petals.

I bought the special diaper cream because I obviously cared about our son the most.

I mashed the bananas in the green bowl.

I sneered. I rolled my eyes.

And then we almost got divorced.

I am not even kidding about this a little bit.

Back then, I thought it all mattered so much. I thought that if I didn’t do everything exactly right then Jack wouldn’t outgrow his autism and our life would be miserable. That’s what the voices in my head told me, anyway.

Well, we were pretty miserable, but it wasn’t because of his autism. It was because I was trying to control my life’s unfamiliar landscape through ridiculous details like diaper cream and baby food.

It was because Joe’s opinion ceased to matter.

It was because I was alone and angry and sad on my island, and I didn’t even know how I got there.

Jack is thirteen now. I am forty-two. I have been living with his quirks and his anxiety and his autism for nearly a third of my life. I understand the island a little more every day.

People like me, we use smugness and sneering and bananas to protect a small inner light. This light, it flickers like a tiny candle on a windy day.

So we build a wobbly fortress around our candle out of sticks and stones and green plastic bowls. We have to hide it from the wind, and the world, and maybe even ourselves.

With my marriage crumbling before me, one stick at a time, I dismantled my fortress and I tried to weed out the resentment.

Thirteen years later, here in front of me is this man and next to me is this boy and they love each other a lot and their love is different from mine and I have learned that is very, very okay.

The thing is, Joe is much better at so many things than I am when it comes to this unusual boy of ours.

He always lets him rub his hair between his fingers, which I never do because I hate when people touch my hair. 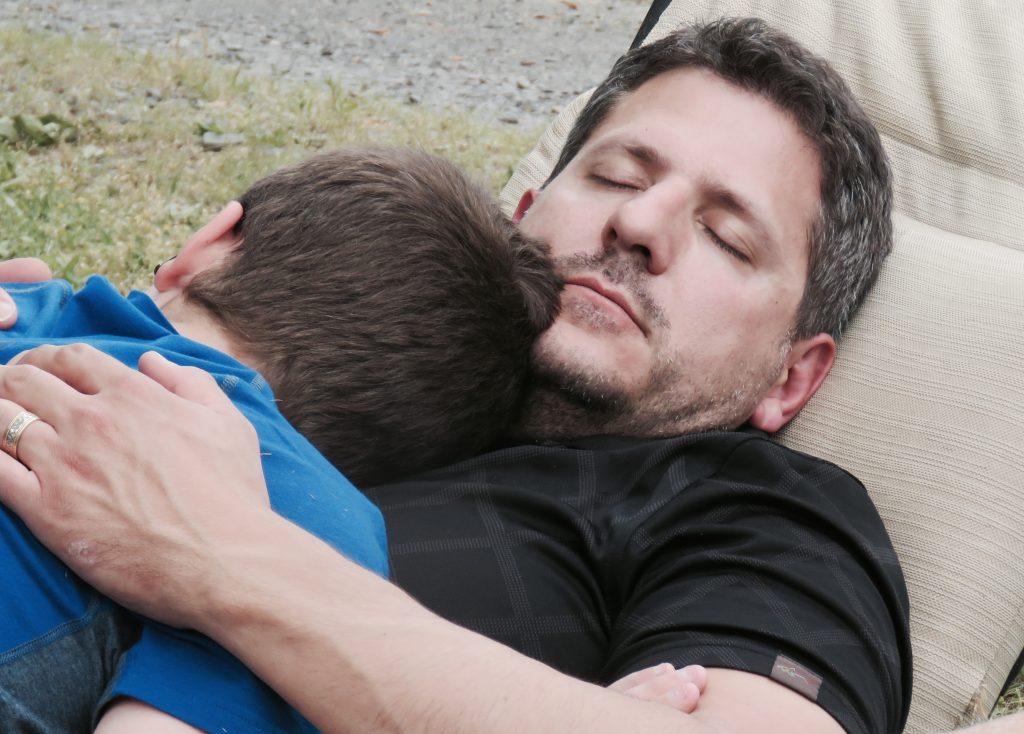 He always shows him the receipt when they go grocery shopping so Jack can see that apples were on sale but the grapes were more expensive than usual.

And when Jack is tired, or he has a headache, it is his father he seeks. He stretches his long body on top of Joe’s, and closes his eyes.

He is the gain to my loss—the ultimate balance sheet of marriage and parenting.

I can’t lie. Every now and again the old voice in my head starts to whisper, and I fight the urge to become The Person again. I read the latest research on autism and begin to panic, or I worry Joe won’t remember to give Jack his medicine when I’m out with my book club and maybe I should write down a little reminder,

Do me a favor. Take a moment today, and look in the mirror. Look yourself right in right in the eye. Are you The Person? Are you standing in the way of a loving, messy, unpredictable relationship because you have marooned yourself on an ivory island?

Don’t stand in the way, that’s what I want to tell you. Don’t block the light from him, or her, or the world. Come out from beneath your pile of sticks, and take a deep breath.

The wind will stop blowing, I promise. You will stand straight and tall and honest in the still, tranquil air and nothing bad will happen to any of you. It is in the quiet space of light where life is lived best.

And remember, it’s never about the bananas.

I’m really scared about what’s going to happen to him. 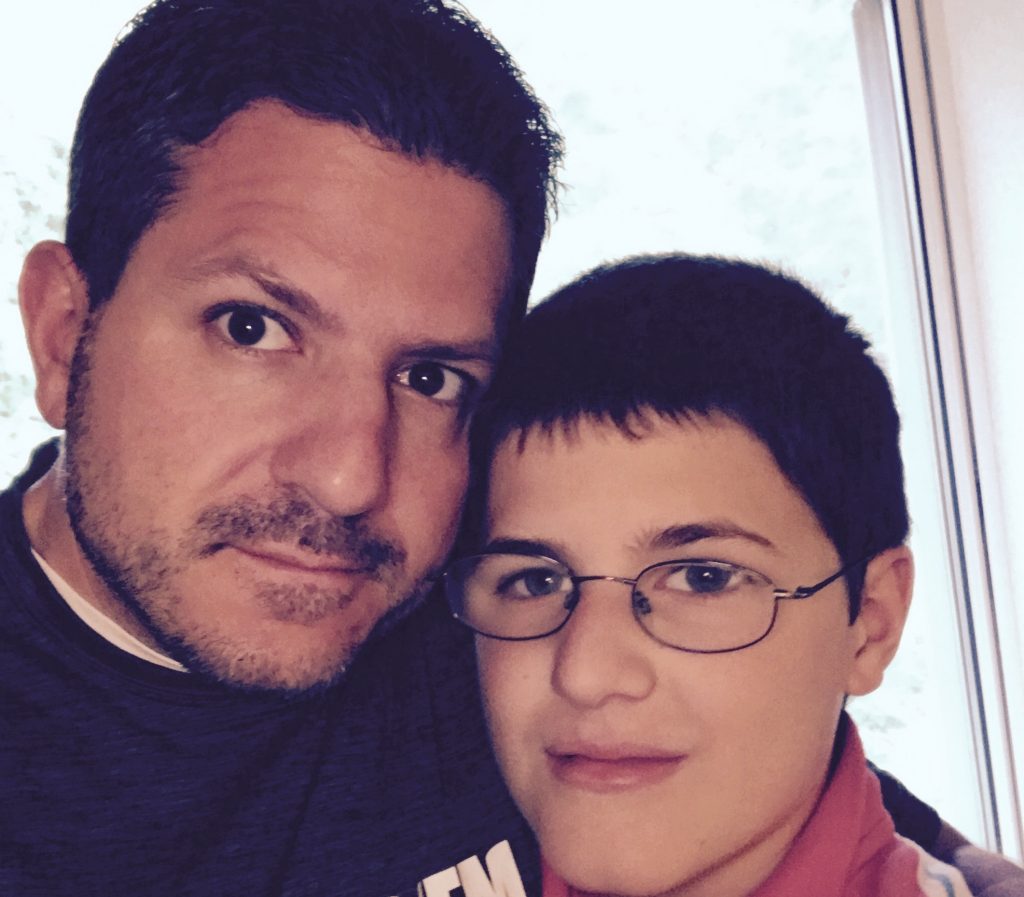 My Son Jack Did You Know?

My Father Was a Teacher

Whenever I go to my grandmother’s house, I ask her about the time the world turned upside down in the blink of an eye. “Well, when I was twelve, something called Coronavirus ripped through our country. It was so scary.” I nod my head, and wait. “People were dying. There weren’t enough ventilators, or masks. […]

Motherhood is the best thing that will ever happen to you. The days are long, but the years are short.  Soak up every moment.  Oh, you work? Who takes care of your kids while you’re gone? Oh, you stay home? What do you do all day? Are you having trouble losing the weight? You should […]

They Love Me Still

Editor’s note: I wrote this post based on conversations with my son Jack, and from observing the incredible love he has for his grandmother and his grandfather. My Grandma is eighty one years old.  She was born in Italy. The year was 1938. She is much shorter than I am.  She likes to cook and feed […]